The award, which was in the small and mid-cap category, recognised AURELIUS’s sale of the Switzerland-based ICT service provider connectis AG, together with its smaller sister company SOFTIX AG, to SPIE Group. The purchase price of the deal, which took place in August 2014, was CHF 48.0 million.

Now in their 14th year, the Private Equity Awards are the most respected accolades in the industry. Organised by RealDeals in conjunction with Cass Business School, the judging panel is made up of leading industry practitioners.

Dr Dirk Markus, CEO of AURELIUS, said “We are delighted to have won this award, and to have been chosen by our peers in the industry makes it even more special. Under our ownership, connectis was fully restructured, significantly enhancing revenues. The deal was just one of our successful exits in 2014, and we expect to see busy transaction activity again this year.“ 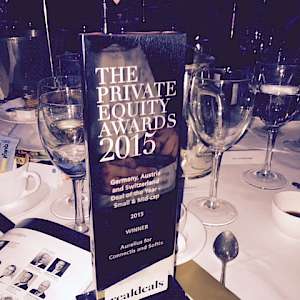